Legendary Texas Democrat operative Gerry Monroe is blowing the lid off 2020 voter fraud in Harris County, Texas, which houses the city of Houston. As NATIONAL FILE has extensively reported, the Joe Biden campaign’s Texas political director Dallas Jones was implicated in a voter fraud scheme which saw a campaign assistant for Sheila Jackson Lee submitting fraudulent paper ballot applications on behalf of dead and unaware voters. Gerry Monroe will be interviewed on NATIONAL FILE TV (live on Twitter) in the 11 AM ET hour on Thursday August 5. Here is Gerry Monroe laying out some evidence:

Voter Fraud Exists not only in Texas but in Every state

Identities of living and dead people were stolen in Harris County, Texas to fraudulently vote in the 2020 election, according to bombshell audio obtained by NATIONAL FILE. A convicted forger who mailed the fraudulent ballot applications in Democrat Congresswoman Sheila Jackson Lee’s district worked as a campaign assistant for Sheila Jackson Lee’s 2020 campaign and has gotten paid by Jackson Lee’s campaign efforts in the past.

The Joe Biden campaign’s 2020 Texas political director Dallas Jones oversaw this alleged voter fraud operation and he was interrogated by the FBI in the last weeks of the 2020 election according to insiders. The audio below includes phone calls in which people confirm that their identities or the identities of their dead relatives were stolen in Harris County.

This information has been provided to the Texas Secretary of State for the purpose of aiding Texas Attorney General Ken Paxton’s office in formal investigations.

AUDIO CLIP 1: WOMAN SURPRISED TO FIND OUT SHE HAS BEEN VOTING: “They’ve got a Sylvia Thomas…voting in Harris County,” said private investigator and former FBI Special Surveillance Group member Charles Marler, who called Sylvia Thomas and correctly cited her February 19, 1940 birth date. Sylvia Thomas says “I’ve been away from Harris County” and confirmed that she has not voted in Harris County in recent years even though someone has been obtaining absentee ballots on her behalf. The woman does not recognize the name of Tomar Bishop, who obtained the absentee ballots associated with Thomas’ identity, or Gloria Palmer, the recent Sheila Jackson-Lee campaign PAC vendor who oversaw Tomar Bishop. Sylvia Thomas wonders “What else are they doing?” in addition to fraudulently voting on her behalf. Here is Sylvia Thomas’ absentee ballot application in the 2020 election (with her address obscured), which is just one of the fraudulent absentee ballot applications in the possession of NATIONAL FILE: 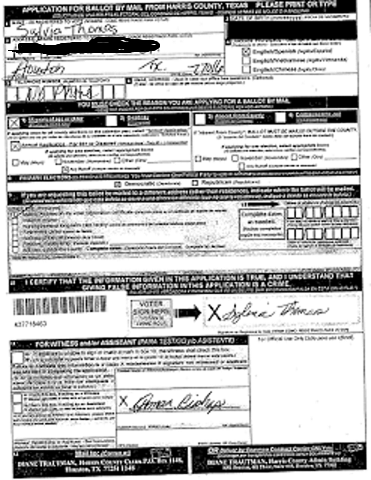 AUDIO TWO: A DEAD MAN APPLIES TO VOTE: In this call, private investigator Charles Marler confirms with a woman in Harris County that a man who applied to “vote” in the election named Jesse Burks passed away on November 4, 2015. The woman confirms this death. The dead Burks’ address matches the address of the “voter.” The woman does not recognize Tomar Bishop, who obtained the absentee ballot, or Gloria Palmer, who mailed the dead man’s ballot application in.

AUDIO THREE: A DEAD MOTHER APPLIES TO VOTE: Private investigator Charles Marler confirms with a woman in Harris County that her mother Gloria Chambers, born in 1946, voted in the election despite dying in 2010. The daughter of the deceased voter does not know Tomar Bishop, who obtained the absentee ballot, or Gloria Palmer, who mailed the dead woman’s vote in. “That’s fine, because we don’t know either one of those people,” said the daughter of the dead voter, consenting to cooperate with Marler’s investigation. 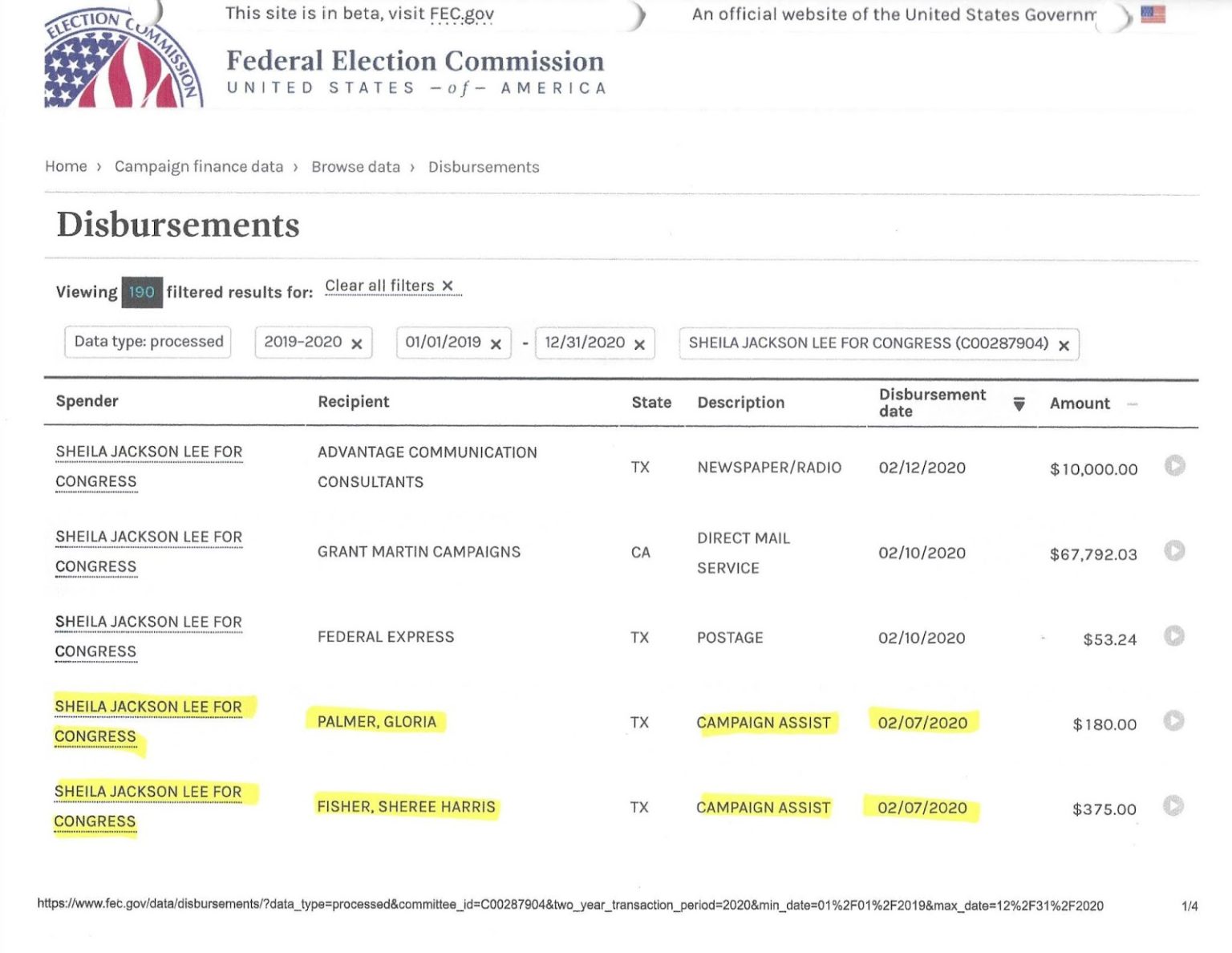 Investigator, Charles Marler, tells NATIONAL FILE that “The vast majority of victims are people who are not aware their vote was stolen. In Harris County the first ballot in from ballot harvesters is counted, all second votes are discarded for that individual.”

Democrat political strategist Damien Thaddeus Jones, who served as regional political director for Beto O’Rourke’s U.S. Senate campaign, has come forward to blow the whistle on a massive voter fraud ring in Harris County, Texas. The voter fraud ring is overseen by Dallas Jones, who served as Texas Political Director for the Joe Biden presidential campaign. In this stunning audio obtained exclusively by NATIONAL FILE, Damien goes into detail about Dallas Jones’ fraudulent activity and work for Biden. On the tape, “Sheila” refers to Sheila Jackson-Lee. This article below delves into the massive evidence of voter fraud — including photographic evidence and sworn affidavits — that emerged in Harris County in 2020, and how its direct link to the Biden campaign provides even more justification for President Donald Trump’s ability to claim victory in the presidential election.

LET’S BREAK DOWN THE FACTS ON WHAT HAPPENED IN THE FRENZIED FINAL WEEKS OF THE 2020 ELECTION:

Harris County, Texas conducted 24-hour voting in the 2020 election, even as the county became engulfed in a voter fraud scandal that ensnared the Joe Biden campaign’s recent Texas political director Dallas Jones. A well-placed insider named Constance Stanton tells NATIONAL FILE that Dallas Jones was interrogated by the FBI and fired by the Biden campaign after he was implicated in an illegal Ballot Harvesting operation in sworn affidavits first reported by NATIONAL FILE. This scandal has since been picked up by various news outlets across the nation, including by Fox News. Vote count discrepancies are reported in Harris County.

Sources within the FBI told NATIONAL FILE that Dallas Jones was interrogated but was not necessarily “picked up,” implying that Jones voluntarily submitted to FBI interrogation. Multiple sources tell NATIONAL file that Jones was fired by the Biden campaign.

As Texas goes, so goes the nation.  Harris County did not allow the GOP State Conversation to take place this past summer and it seems the socialist Democrats took complete control of Harris county when they won offices in 2018, by a 200,000 vote margin.

20 private investigators have uncovered a great deal. What has been uncovered is a group of masterminds wanting to destroy the Texas voting voice. Some of the masterminds include Democrat County Commissioner Rodney Ellis and Democrat State Senator Boris Miles. They have two captains, Gerald Womack and Dallas Jones.

Jones was hired by the Biden campaign to run the Biden Texas operation. These captains have scores of paid vote harvesters working for them. Vote harvesting is a second-degree felony under the Texas Election Code.

This is a criminal operation that these Democrat elected officials are running. Dallas Jones was picked up by the FBI, the weekend before last, for 2 days of interrogation. He was subsequently fired by the Biden campaign.

They harvest ballots by mail from nursing homes, homeless centers, door to door in poor neighborhoods, often dressed as Census workers. They offer $50 gift cards in front of stores asking people to take ballots by mail, acquired from the above, to sign and mail at a local post office. They hold ballots by mail in several locations where people forge signatures on the collected ballots by mail.

Evidence has been presented to the local DA, Kim Ogg, who received a substantial amount of political contributions from Soros-funded organizations in her election in 2018. The evidence included an affidavit and other evidence, including photographs, from a 30 year black police officer who was serving as a poll watcher and saw the election judge use a table full of IDs to vote unregistered people that were voting by drive-through.

This is a criminal act according to the Texas Election Code. The district attorney’s office did not even want to entertain our criminal complaint. This information along with other affidavits of harassment of poll watchers and alternate election judges was sent to the office of Republican Atty. General Ken Paxton.

The Democrat County clerk, Chris Hollins, instituted drive-through voting by anyone for any reason which is in violation of the Texas Election Code. A petition for writ of mandamus before the Texas Supreme Court last week to stop this illegal activity and they voted 7 to 1 to deny the petition.

The County clerk has now opened up the early voting polling locations until 10 PM for the rest of the week until the last day of early voting, when eight polling places will be open 24 hours. Of the 120 early voting locations, the vast majority are in Democrat areas of the county. In violation of the Texas Election Code, Hollins independently mailed ballots by mail to all individuals 65 and older, in violation of Texas Election Code, which requires an individual to request a ballot by mail before it can be sent. Hollins planned on sending every registered voter a ballot by mail, but the Texas Supreme Court granted our petition and stopped this.

The Harris County voter files have not been purged since 2016 when the Democrats took charge. We can document that dead people have voted in this election and people who have moved out of state. No arrest warrants have been issued and we do not expect them to issue any.

In the meantime, the Democrats are implementing their massive election voter fraud scheme, mostly in open sight. One arrest would go miles in stopping this election fraud scheme. The drive-through locations are located in primarily in Democrat areas. This also violates the 14th Amendment.”

PRESS RELEASE: Discrepancy in 3 voting counts from Harris County @CGHollins. Still no answer. Daily Record of EV shows 1,090,445 votes, while the number reported by Clerk to the @TXsecofstate is 1,081,265, & @HarrisVotes roster shows 1,092,521. Which is correct? #txlege pic.twitter.com/lZMXK5XVHB

Liberal Women Announce Boycott…Let’s Hope They Follow Through with Their Promise!