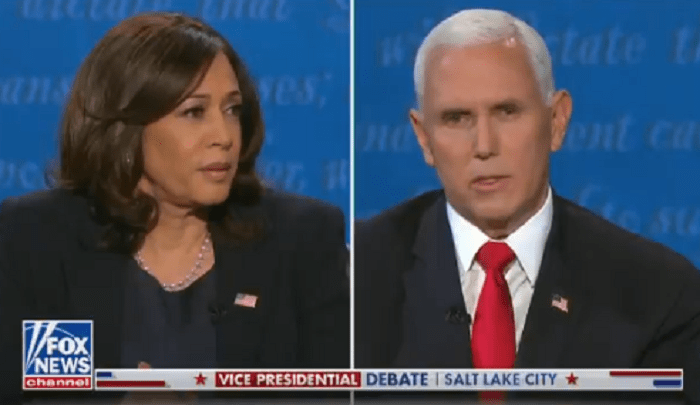 During Wednesday’s 2020 Vice Presidential Debate, vice presidential candidate Senator Kamala Harris (D-CA), among all the other lies she threw out during the debate, repeated the “Atlantic” lie that President Donald Trump referred to fallen soldiers as “suckers” and “losers.”

Of course, the Atlantic hit piece was never corroborated by anyone who attended the ceremony in question, and the author of the piece eventually admitted that his “anonymous” source may have been mistaken.  That’s the biggest understatement since General Custer said, “Ooh, look!  I think they’re friendly Indians.”

Jeffrey Goldberg, the author of the lowlife political hit piece, even admitted that using “anonymous sources” is bad.  The reason it’s bad to use anonymous sources is because the liberals in media have used it to say nasty things about conservatives and Republicans when an anonymous source doesn’t exist.  For example, I could say that an anonymous source told me that there are explicit photos of Joe Biden in a compromising position with a donkey, and if the same standard was applied to me, I would get away with it, because my “source” is anonymous.

Harris brought up the infamous Atlantic article in the vice presidential debate on Wednesday night, which has been debunked six ways to Sunday.  I don’t know what the Democrats’ strategy was to bring up this topic that no one really believes, as well as others like when she brought up the Charlottesville lie that Pence destroyed her over.

From Breitbart after they fact-checked the Atlantic lie after Democratic presidential nominee former vice president Joe Biden and others repeated it:

Biden was referring to a story in The Atlantic earlier this month that claimed — citing four anonymous sources — that Trump had specifically referred to the American dead in a World War I military cemetery in Europe as “suckers” and “losers.” (Biden went further, claiming Trump had been accused of referring to all veterans that way.)

No one else has corroborated the Atlantic‘s claim. Even Fox News’ Jennifer Griffin, who claimed that she had “confirmed” other details in the story (from two similarly anonymous sources), could not confirm the Atlantic‘s “suckers” and “losers” claim.

Moreover, more a dozen current and former Trump administration officials have publicly and demonstratively denied the claims in the Atlantic article — including former National Security Adviser John Bolton, who has become a Trump critic.

The vice president tried to debunk the lie by responding to it, however, he was interrupted by moderator Susan Page, who spent the whole night in the tank for the Democrat. Is it me, or do these biased moderators always come up with questions that seem to insult the Republicans?

A list was compiled of 21 government officials, including 14 people who were on that Paris trip, who went on the record to refute the fake anonymous source that was used in the Fake News story by the Atlantic.

Pence did manage to say, citing the personal experience of his own son and son-in-law in the military, that President Trump cares deeply for the troops.

After the debate leftists on social media and on Fake News networks like CNN and MSNBC ignored Pence’s debunking of Harris for not only the Atlantic lie, but many others.  Instead, they spent a lot of time saying that Pence was “mansplaining” to Kamala Harris.  When you debate a woman who either doesn’t understand how tax cuts being removed is actually raising taxes, or she just lies, pointing out the truth of the issue is man mansplaining.

They obviously got the idea to call out mansplaining after Harris said more than once, “I will not be lectured by the vice president.”  When someone says, “I will not be lectured…” do you know what that means?  It means the person realizes they are losing the debate, and when they cannot give an argument that wins the issue, they attempt to delegitimize their opponent’s positions be calling it lecturing.

So, if you treat your debate opponent like an equal, it’s considered mansplaining.