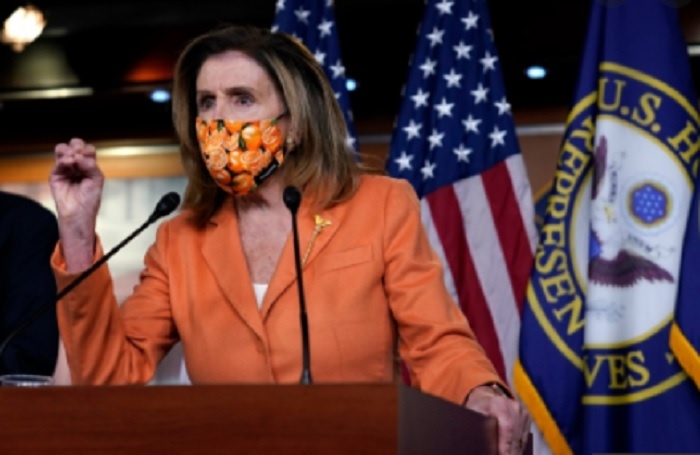 I knew from the minute House Speaker Nancy Pelosi’ made her weirdly offbeat 25th Amendment comments were about trashing President Donald Trump, but now we know that’s what it was about.  The Democrats are insufferable at this point.  They will stop at nothing to get rid of Trump.  They spent the last four years trying to do just that.  Trump’s entire first term has had to endure non-stop daily attacks on the president and his administration, all as election interference for the November election.

On Thursday, during her press conference, Pelosi told media to come on back on Friday to hear something regarding the constitutional amendment by which a president could also be faraway from workplace. Handed within the wake of President Kennedy’s assassination in 1963, the 25th spells out what could also be lawfully achieved when a sitting president is deemed not match to serve.

The 25th Amendment to our august Constitution was never intended to be a partisan weapon against a president you don’t like.  It was intended to bring order out of chaos for a nation suffering from a tragedy.

However, this is 2020 and the Democrats run the House of Representatives, and literally anything can happen, regardless of how absurd it sounds.

We had a deadly virus hit the world and we’re not allowed to mention where it came from, and we are locked down while we watch our economy collapse thanks mostly to Democrat governors and mayors, because for the most part, Republican governors and mayors have reopened and their economies seem to be coming back.

President Trump took to social media to respond in the only way he should have.

We have another way of getting rid of presidents we don’t like and that’s called elections.  Pelosi and company want to create a commission to figure out how to use the 25th Amendment against future presidents who don’t do their bidding.  Pelosi wants her usual suspects to figure out that they can’t impeach a president, because it’s too difficult to actually get through that process that they already experienced how hard it is to do and lost all political credibility after America witnessed the sham impeachment they did to President Trump.  Instead, they will just create a commission where they’ll use smart people to create well-crafted lies that sound convincing about how the president, who didn’t do their bidding, is suffering from a mental decline and should be removed from office.  This is a way to shortcut the impeachment process.

The Democrats have a long history of using shortcuts to get what they want.  A good example would be same-sex marriage.  They couldn’t get that passed legislatively, because the American people were overwhelmingly against it, so they shortcut the process by going straight to the Supreme Court to get it.

The Democrats are doing all kinds of things to knock out our Constitutional liberties and processes.  Take how they want to get around the Electoral College by having states agree a popular vote mandate, where instead of Electors casting votes by who won the state, they want to make it that whoever wins the popular vote, their state will send the Electors to vote for that candidate.

Elections aren’t good enough for Pelosi.  We have an election in less than a month, and Pelosi told the news media that she and Representative Jamie Raskin (D-MD) are going to introduce 25th Amendment legislation on Friday.  This is legislation Raskin wrote back in 2017, but it went nowhere, and it’s not going to anywhere this time around either.

When she was asked on Thursday if she thought it was time to invoke the 25th Amendment to remove Trump from office, the Speaker declined to go into detail, however, she questioned why the White House wasn’t providing a full accounting of Trump’s health, including when he last tested negative for COVID-19.  His doctors have publicly announced Trump’s condition, more than once.

“I’m not talking about it today except to tell you, if you want to talk about that, we’ll see you tomorrow,” Pelosi said. “But you take me back to my point, Mr. President, when was the last time you had a negative test before you tested positive? Why is the White House not telling the country that important fact about how this made a hot spot of the White House?”

The Democrats don’t expect this stunt they are doing to actually become law.  That’s not the point of it.  They know there aren’t 2/3 of either house of Congress that would be necessary to enact the 25th Amendment.  The whole reason Pelosi is doing this is sow seeds of doubt in Trump’s ability to govern.  It’s just another gaslighting attack on Trump to get you to not believing your own lying eyes when you see the president moving about and speaking rationally as if he never had COVID in the first place.  They want you to believe that there’s something wrong with him, be it because of medications he’s on or whatever.

This could also be a distraction from the news that Pelosi is holding the next stimulus package hostage for political points.  If airlines have to start laying people off by the thousands, it will be precisely because of Pelosi, but she knows the Fake News will blame it on Republicans, specifically Trump.

No matter how you look at this, Pelosi’s attempt to create a faster, easier way of impeachment is another way that Democrats are attempting to weaken the Office of the President and pull off a huge power grab for themselves.