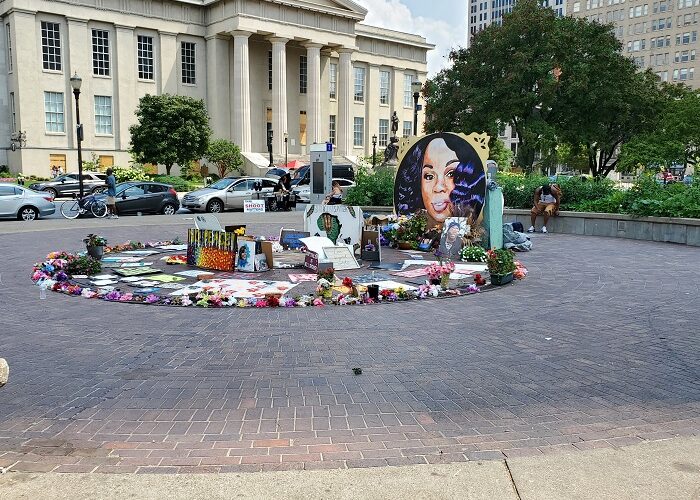 The mother of Breonna Taylor mother, who was shot and killed by police during a drug raid, is accusing the Kentucky attorney general of abusing the grand jury system and she wants a new prosecutor who is “committed to properly investigating the case.”

“Grand jurors did not believe officers were justified in killing my daughter, yet A.G. Cameron denied them of their right to render a decision reflecting the same,” Tamika Palmer said in a letter written to the Kentucky Prosecutors Advisory Council on Wednesday.

Mind you, a grand jury is secret, and they have the power to decide whatever they want.  There aren’t even lawyers in the room outside of the prosecutor.  That means there are no defense attorneys allowed in a grand jury hearing, which pretty much renders Mr.s Palmer’s statement moot.

Taylor, a 26-year-old Black woman, was killed in March when three police officers attempted to serve a narcotics warrant at her home.

The officers had what is referred to as a no knock warrant, a warrant which says that the police have it upon good faith information that the suspect will be armed and dangerous and therefore they should not give away the element of surprise.  But, the police entering the apartment that day did not use the no knock warrant, rather, they knocked on the door and identified themselves as police.  Witnesses attest to that.

After knocking and identifying themselves, police then forcibly entered the dwelling, which was 100 percent legal.

After the officers knocked down her door, Breonna’s boyfriend started shooting at them, claiming fear of an intruder.  Police returned fire to protect themselves hitting Taylor five times.  She died.  It was reported that the boyfriend used Breonna as a human shield in the hallway where the shooting occurred.  No drugs were found.

A lot of speculation, some say lies, went around after the incident, some that Breonna and boyfriend were in bed when she was shot, and that was false.  It was also said that the police didn’t knock and identify themselves, and that was false.  In fact, if you want someone to blame for Breonna’s death take a look at the boyfriend, and Breonna herself.  I know that sounds harsh, but she was with a known drug dealer who claims he thought the person coming through the door was Breonna’s ex-boyfriend who was also a drug dealer.  It was known that Breonna would hold money, and/or drugs at her place for the boyfriend’s, because nobody was going to suspect the young woman would ever do such a thing.

Last month, Attorney General Daniel Cameron announced that the grand jury indicted one officer, Brett Hankison, on three counts of wanton endangerment because he fired negligently into a neighboring home.  Cameron said that the “grand jury agreed” that the police officers were justified in firing the shots that killed Taylor because her boyfriend shot at them first.

Two of the grand jurors publicly denied Cameron’s appraisal this week.  The anonymous jurors told CBS that they thought the officers’ actions were “negligent” and “criminal,” but Cameron never allowed them to consider manslaughter or murder charges.

“They never gave us the opportunity to deliberate on anything but the charges for Hankison. That was it,” one of them told Gayle King. “As a matter of fact, when they announced that those were the only charges, there was an uproar in that room. There were several more charges that could have gone forward on all of those officers.”

That’s called prosecutor discretion, and it works both ways.  You know how the Soros-funded progressive prosecutors who do things bass ackwards, like Kim Gardner, the Circuit Attorney who charged the McCloskeys in Missouri for defending their home by brandishing weapons after a mob of rioters broke through a locked gate in their community and were threatening the couple.  Or how about Kim Foxx in Chicago who suddenly dropped all charges against actor/singer Jussie Smollett, who also dropped over 25,000 cases at the beginning of her term?  Well, Cameron decided that after witnesses said the police knocked and identified themselves, and after the boyfriend shot at police, they had the right to defend themselves, and if anyone should be charged with Ms. Taylor’s death it should be the boyfriend.

Palmer said that Cameron’s characterization of the decision made by the grand jury “flat out lies” in her letter.  Of course she did, because she’s a grieving mother.  No one expects a grieving mother to see things clearly.

“At a minimum, my daughter deserves, as do all aggrieved victims, a competent and capable prosecution team which is committed to properly investigating the case, evaluating the law from an unbiased lens, presenting the evidence and allowing the grand jurors to perform the functions guaranteed to them under the law,” she wrote.

In other words, a prosecutor is only competent if they go after the police for doing their job.

Cameron defended himself against the growing criticism, stating that he stands by the findings.  Once again, the facts make it difficult for a normal thinking person to believe the police murdered a young woman for no reason or that Breonna’s death occurred due to police negligence.  The facts of the case are the police knocked on the door and identified themselves.  Breonna’s boyfriend shot at police as they were entering the home, and police returned fire to protect themselves.  These are the facts.

“The tragedy, and I’ve said this from the beginning, was that Breonna Taylor was in that hallway next to Kenneth Walker when they returned fire and they hit her,” he told Fox News earlier this month. “No one disputes that this is a tragedy, but sometimes our criminal law is inadequate to respond to a tragedy.”

Taylor’s death became a movement and started a wave of national protests against police brutality, even though there was no police brutality according to the findings.  This is the topsy-turvy world we live in now where up is down, wrong is right, and right now wrong.

May Breonna rest in peace, but may her death be a lesson to all that being associated with drug dealers could end up getting you killed.