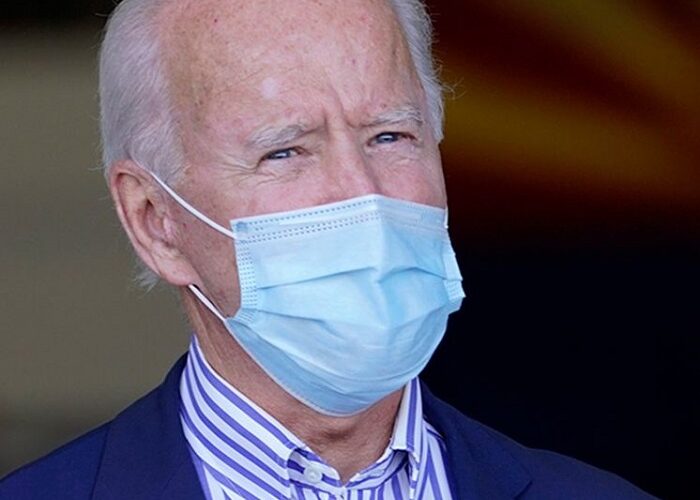 We’ve seen a lot of things during this presidential election cycle where the Biden campaign has shown a complete lack of transparency with the American electorate, but this takes the cake.

Do you think they would have ever allowed Donald Trump to get away with something like that?

This smacks of Nancy Pelosi telling the American people that we had to pass the Affordable Care Act to find out what was in it. Just plain stupid politics.

Biden suggested that if he admits he’s for packing the court (I say that because he answer no if he didn’t support it) then major media coverage of his stance on the Supreme Court would needlessly distract from “what’s going on” in America.

Senate Republicans are pushing to confirm Judge Amy Coney Barrett to the Supreme Court, a move that would solidify a 5-4 conservative majority among the court’s justices.   Some would say 6-3, but I no longer count Chief Justice John Roberts as a Constitutionalist on the Court.  Is has decided to vote with the leftists on the Court.  Some Democrats, enraged and terrified by the move to hold hearings, have floated the idea of packing the court, which means increasing the number of justices so that there would be a majority of anti American radical leftists on the Court so that Democrats could get everything they want that they can’t get legislatively, which is mostly everything they want.  All that hinges on Biden winning and the Democrats taking over the US Senate, God forbid either happen.

Both Biden and his running mate Senator Kamala Harris (D-CA) have refused to say whether they would attempt to pack the Supreme Court if elected.  On Thursday in Phoenix, Biden tried to explain away his reason for not letting the American people know how he thinks about one of the most important issues a presidential candidate can argue.

“You’ll know my opinion on court packing when the election is over,” Biden said during a campaign stop in Phoenix.

“It’s a great question, and I don’t blame you for asking. But you know, the moment I answer that question, the headline in every one of your papers will be on the answer to that question,” he said.

“Whatever position I take in that, that’ll become the issue,” Biden said. “The issue is the American people should speak. You’re voting now. Vote, and let your senators know how you feel.”

Biden used an old politician’s trick (he is an old politician) where you compliment the other person so that they let you get away with something you say that they ordinarily wouldn’t.  Saying, “It’s a great question, and I don’t blame you for asking,” is buttering up the reporters who will be congenial and not fight him.  That humanistic effect never seems to be offered to Donald Trump.

President Trump and other Republicans have warned voters that Biden and other leading Democrats are going to try to “pack” the Supreme Court with radical leftist justices to offset an expected solid conservative majority that will be the case once Amy Coney Barrett is confirmed as Trump’s selection to replace Justice Ruth Bader Ginsburg on the Court.  The Democrats have behaved like spoiled rotten brat children who lash out when they don’t get their way.  But we all have no one else to thank but the Democrats themselves, specifically former Senate Majority Leader Harry Reid who created the nuclear option that is now going to be the tool used by Senate Majority Leader Mitch McConnell.

“We are going to get a whole lot done, and as I’ve said, everything, everything is on the table,” Senate minority leader Chuck Schumer (D-NY) said earlier this month during an evil orgasm when responding to Republicans promising to confirm Barrett to the Court before the November 3rd elections.

During the vice presidential debate on Wednesday night, Democratic vice presidential nominee Kamala Harris also refused to answer the question posed to her by Vice President Mike Pence on packing the court.  The California senator continued to refuse to answer.

Harris said that the American people will vote and they should decide who gets to make the nomination, and Pence pointed out that Americans are already voting now, and she and Biden should be straight with them.

There are only two answers possible, yes or no.  If the answer is no you do not support packing the Supreme Court, then you would say so, because that’s a rational response to the American people, answering in a way that ensures them that you are not a raging radical leftist lunatic who wants to destroy our republic as we know it and reshape it into a utopian heave on earth that resembles the old Soviet Union.

The only reason to not answer the question is when your response is yes, and you don’t want to piss off half of your base.  But Biden and Harris have another problem.  If they admitted they were not for packing the court, they will lose the radical progressives just like Trump said they would in the debate last week.