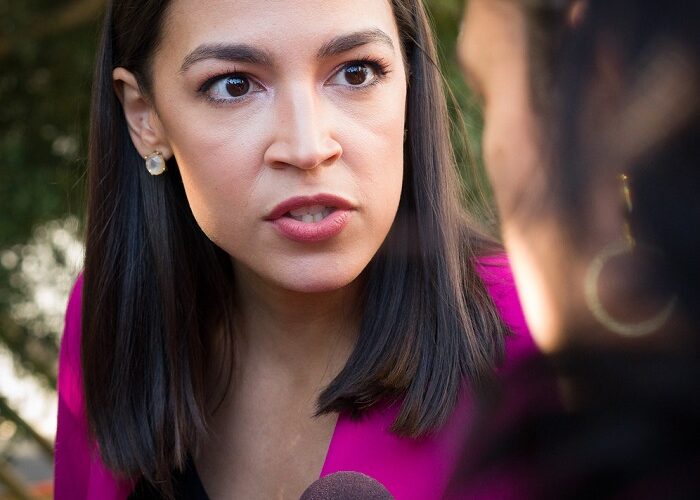 I’d like the Congresswoman to name names. AOC should tell us which Republican members of Congress she’s insulting. Personally, I think she should be censured over such a comment.

“Sick and tired of Republicans who co-opt faith as an excuse to advance bigotry and barbarism,” the leftist freshman congresswoman claimed on Twitter. “Fact is, if today Christ himself came to the floor of Congress and repeated his teachings, many would malign him as a radical and eject him from the chamber.”

“When politicians use faith as an excuse to pass and uphold laws that seize control of people’s bodies but not guarantee them healthcare, feed the poor, shelter the homeless, or welcome the stranger, you have to wonder if it’s really about faith at all,” she later claimed.

The word “life” is the first of inalienable rights that Jefferson listed in the Declaration of Independence when he wrote, “We hold these truths to be self-evident, that all men are created equal, that they are endowed by their Creator with certain unalienable Rights, that among these are Life, Liberty and the pursuit of Happiness.” [emphasis added]

I don’t see healthcare, feeding the poor, or shelter listed.  That’s because those are not rights that come from God, while life is.  AOC has shown time and time again that she doesn’t understand many things, yet she speaks as an authority on mostly everything.  I think this is yet another one of those times.

AOC’s claims are ridiculous at best, not supported anywhere in the real world since most Republican members of Congress identify as being Christian.  She just went off again with rhetoric she probably read on Twitter and went with it, without ever thinking before opening her mouth. The New York congresswoman has a history of doing that.

“In the 116th Congress, just two of the 252 GOP members do not identify as Christian: Representatives Lee Zeldin (R-NY), and David Kustoff (R-TN), are Jewish,” Pew Research Center reported. “Among Republicans and those who lean toward the Republican Party in the general public, 82% of registered voters are Christians, compared with about 99% of Republicans in Congress.”

In response to numbers compiled by Pew Research Center, 99.2 percent of the Republican members of Congress identify as being Christian.

AOC’s hair-raising and completely unsupported remarks came as confirmation hearings began on Monday for Supreme Court nominee Amy Coney Barrett, who is a devout Catholic. AOC comes from a Catholic family herself.

The incredible gall it took for AOC to make such a bold statement is that at every turn progressives have done everything they can to remove Christianity from the public square, including a staunch reliance on the lie they fabricated over Jefferson’s Separation Clause. It is Democrats who have tried to remove God from schools and public buildings, and if they had their chance they would take chisels to every cross or star of David on the tombstones of fallen soldiers at Arlington Cemetery. This I can say based on their past behavior, especially from the leftists on the Supreme Court who were ready and willing to throw out monuments to dead soldiers because they had a cross.

Republicans on the Senate Judiciary Committee talked extensively about Democrats’ bigoted assaults on Barrett in 2017 over her being a Catholic, violating the Constitution’s clause that says that no religious test will ever be given to hold any public office. Didn’t matter to Senator Dianne Feinstein (D-CA) who told Barrett during her last confirmation hearing that “the dogma lives loudly in you.” I don’t believe any Democrats defended Barrett at the time.

“Some of my colleagues may once again try to misrepresent and outright disparage Judge Barrett’s religious beliefs and affiliations,” Senator Charles Grassley (R-IA) said. “In 2017, they suggested Judge Barrett was too faithful or too Catholic to be a judge. One senator asked whether she considered herself an Orthodox Catholic. Another told her the dogma lives loudly within you and that is of concern. Let me remind everyone that Article 1 clearly prohibits religious tests for serving in public office.”

Sen. Ben Sasse (R-NE) also sounded off on the issue and the importance of religious liberty.

For Representative Ocasio-Cortez to make statements like this, after weighing zero evidence for her arguments, denies believe in a Benevolent Being. I am shaking my head.