‘Shove It Down Her F**king Throat’: Hunter Biden Molested Close Minor Relative According to Allegations & The His Knew

National File recently got their hands on some previously unreleased conversations between Hunter Biden and his family members, including the current President of the United States.  This article is a great example of the kind of information National File has been sharing with the public. Make no mistake, NF is a name that EVERYONE in DC has been, and will continue to be, talking about for years to come …

National File has uncovered more texts in the conversations between the Biden family which were previously reported by pundit Candace Owens and Biz Pac Review referring to a “sexually inappropriate” relationship between Hunter Biden and his niece. National File has obtained over 800 pages of text messages sent or received by Hunter Biden from 2018 and 2019. In them Hunter repeatedly reveals that his former love interest Hallie, the widow of the late Beau Biden, claimed he behaved in a “sexually inappropriate” way around a minor family member.

Hunter Biden, the son of President Joe Biden, told sister Ashley Biden that former lover Hallie Biden described him as being “sexually inappropriate” with a minor female family member. The text messages were retrieved from the infamous laptop abandoned by Hunter Biden. National File has redacted the name of the person in question, as she is still a minor at this time.

Hallie Biden is the widow of Beau Biden, who Hunter was involved with romantically after his brother’s death. Hunter referenced Hallie’s allegation to multiple people via text messages, including his close family members.

In fact, the texts reveal that most members of Hunter Biden’s family seemed to know about these allegations. Among these family members are Hunter’s parents Joe Biden and Jill Biden, his sister Ashley Biden, and Jim Biden, the brother of Joe Biden. In some cases, family members decided to take Hunter’s “side” of the apparent family argument over the allegations, choosing to believe him over Hallie Biden.

Previous reporting pertaining to the situation, including comments by prominent pundit Candace Owens and Rep. Lauren Boebert, have claimed that the teenage relative in question is Natalie Biden; the daughter of Hallie and the deceased Beau Biden, Hunter’s niece. From Biz Pac Review:

Owens replied, “More importantly— Ashley Biden is the SECOND person in the Biden family that has made incestuous sexual allegations. Do not forget about Hunter’s laptop and the text messages about his niece. These are accounts DIRECTLY FROM the Biden family. Not conspiracies.”

The second person in the Biden family to be caught up in whispers of incest is Hunter Biden’s teenage niece who was said to have been seen topless in photos with her uncle Hollywood LA News reported. The photos were allegedly found on Hunter Biden’s infamous laptop.

Although the alleged photos of Hunter Biden and his niece Natalie Biden were purportedly turned over to jurisdictional authorities in the state of Delaware by former New York Mayor Rudy Giuliani and former New York Police Commissioner Bernard Kerik, there has been no verification concerning that incident to date either. Natalie is the daughter of Hunter Biden’s now-deceased brother Beau Biden. Hunter Biden would go on to have a romantic relationship with his brother’s widow while he was married to someone else.

More importantly— Ashley Biden is the SECOND person in the Biden family that has made incestuous sexual allegations. Do not forget about Hunter’s lap top and the text messages about his niece.

These are accounts DIRECTLY FROM the Biden family. Not conspiracies. https://t.co/WTcXTLFPMo

On September 22, 2018, according to the texts, Hunter Biden was complaining to Ashley Biden about his estranged lover Hallie Biden, the widowed wife of the late Beau Biden. Hallie was frustrated with Hunter, who at this point had spent months away from his family, according to his text messages, using drugs and sleeping with prostitutes in a series of expensive hotels.

According to the text messages exchanged between the siblings, during this time Hunter was barred from seeing a close minor relative by Hallie, who claimed he was engaging in “sexually inappropriate” behavior around the teen.

The subject of the allegations, who is still a minor, was between the ages of 14 and 15 during the time the text messages obtained by National File were sent or received by Hunter Biden.

During the discussion, Ashley noted that she was unaware that Hallie was not allowing Hunter to see this relative. Hunter referenced Hailie’s drug use, and claimed that Hallie had tested positive for cocaine on August 20 and visited him in rehab a few days later, apparently suggesting that Hallie was in no position to bar him from having contact with this family member.

Then, Hunter told Ashley that she sits “in judgement of me in agreement with her [Hallie] that [redacted] cannot be alone with me,” the text messages show. 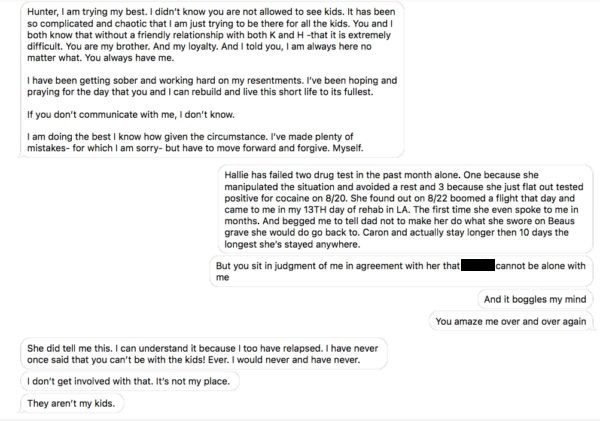 After Ashley told Hunter to keep her name out of the situation, Hunter told his sibling, “WTF are you talking about.” He added, “You were involved in every aspect of my kids life and you’re telling me that you don’t feel it’s appropriate for you to say my brother can see those kids whenever he wants like I did for you while you were killing me,” he asked her. 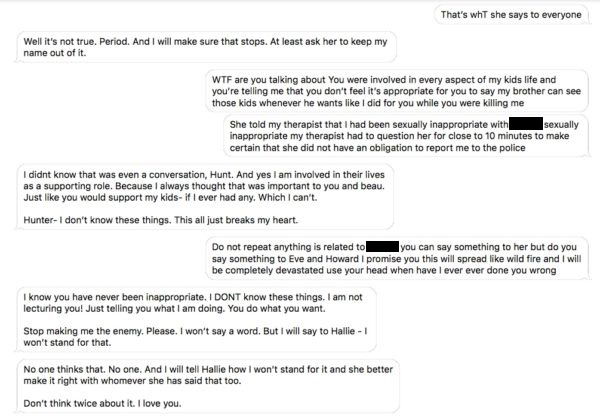 “I didn’t know that was even a conversation, Hunt. And yes I am involved in their lives as a supporting role. Because I always thought that was important to you and beau. Just like you would support my kids- If I ever had any. Which I can’t. Hunter- I don’t know these things. This all just breaks my heart,” Ashley replied.

Hunter asked Ashley to “not repeat anything is related to [redacted],” adding that “you can say something to her but do you say something to Eve and Howard I promise you this will spread like wild fire and I will be completely devastated use your head when I have ever ever done you wrong.”

Ashley Biden received a master’s of social work degree from the University of Pennsylvania’s School of Social Policy and Practice in 2010. She is a known professional social worker, which typically requires mandatory reporting. It is unclear if Ashley Biden would have had a legal obligation to report this allegation at the time, or whether she took any action to report the allegation.

The following day, on September 23, 2018, Hunter attempted to contact a person who appears to be Elizabeth “Liz” Secundy, the sister of Hallie Biden, and thus a relative of the teenage girl. In the text exchange, Hunter told Liz Secundy that he assumes that she is no longer speaking to him because she is “under a lot of pressure.” He again mentioned his frustration with Hallie informing “people I’m sexually inappropriate with [redacted].”

Hunter added, “If any one of you ever repeat that again I swear to god you might as well put the gun to my head yourself because Liz if all the tabloids who live to Dick with me anyway were to repeat a rumor that came from Hallie that that’s why I can’t come home I will not survive that no one could survive that.” 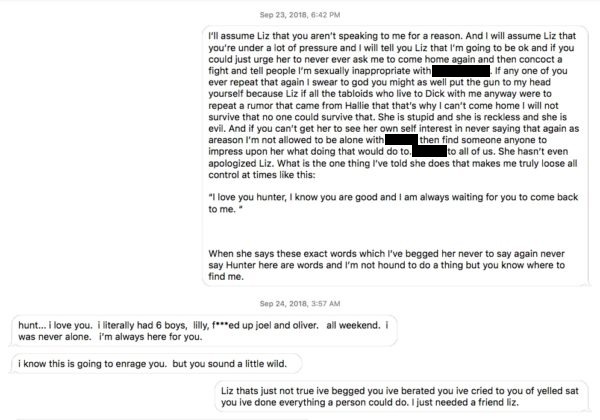 In the early morning on September 24, 2018, Liz told Hunter in a text message that he sounds “a little wild,” per the text messages. Hunter then said “Liz thats just not true ive begged you ive berated you ive cried to you of yelled sat you ive done everything a person could do. I just needed a friend liz.”

What Did Joe Know And When Did He Know It?

Roughly six weeks prior to Hunter’s conversations with Ashley and Liz on August 9, 2018 at 8:21 a.m., according to the texts from the laptop, Joe Biden’s brother, Jim Biden, texted Hunter urgently requesting to speak with him. Jim Biden seems to have been a business partner of Hunter’s in various international businesses related to Ukraine and China at the time.

“It is imperative that I speak with you,” wrote Jim Biden. “We are friends and partners and family. I have always been there for you and you have always been there for me. It is simply not fair to shut me out. This about you and me — nothing to do with Caroline. I love you. Call me, text me, we have to be able to communicate with each other,” Joe Biden’s brother added.

A few hours later following no responses from Hunter, Jim Biden added “I’m not mad or angry. What I want to do is get on a plane and come see you! I don’t want to be driving all over LA trying to find you. It could take me months! Where are you staying? I have a flight at 7:45 est time tonight. Love, U Jim.”

Hunter responded around 2:55 p.m. and said he would contact Jim 15 minutes later. “I’m just down I promise and for good reason. But I swear I am ok,” Hunter told Joe Biden’s brother. “I want and need to come. It’s been to long. Period the end!!!,” Jim replied. “Give me the address. Just between us!”

Then, two hours later at 4:58 p.m., Jim appeared to inform Hunter that someone important – potentially Joe Biden – was informed of a situation involving Hallie Biden. “Everything good. He will be calling you. He will not say a word. I’ll have a truck here sun/ Monday whatever works. I love you,” said Jim.

The next day, Jim reached out to Hunter again, this time insisting that he call either him or Joe Biden: “Hunter, it is imperative you call me or your father. Your father is getting as am I barraged by Hallie. He has not responded I have not responded,” wrote Jim Biden, emphasis added by National File.

Jim explained to Hunter that both he and Joe Biden “agree and trust you” regarding Hallie’s concerns. “She is spreading what you told me and I believe you !!!! Are lies,” wrote Jim.

“Once again we both need you side of the story so we can both shove it down her fucking throat !!!! I implore you to call. Please I/we are on you side. I believe you,” Jim texted Hunter, adding that “this is nothing short of character assassination. Love, U Jim.” Emphasis added by National File. 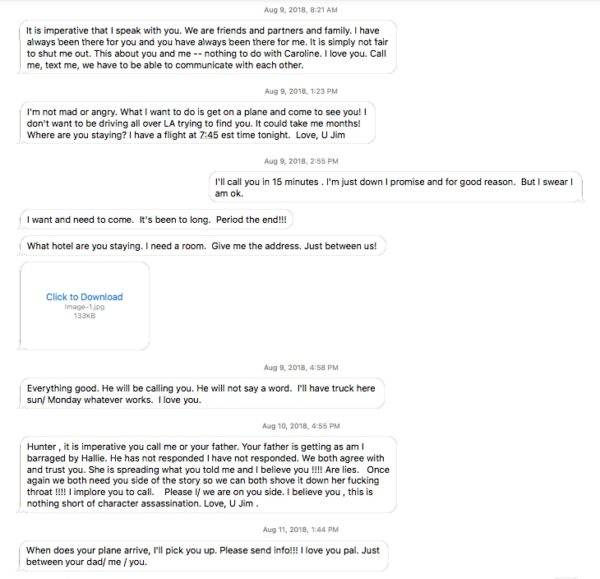 READ MORE …. MUCH, MUCH MORE at National File.com