This is what happens when you have people in charge who have never worked an honest day in their lives.

The price of oil is the biggest monkey on the back of the average American worker.

So what does Biden do?  First his administration shuts down our domestic pipelines, taking us away from being a net exporter of oil.  Then he blocks the import of Russian oil.  Now, this would not be the end of the world IF we were still harvesting oil at the same rates we were under Trump here in America.

Jim Hoft, the founder of The Gateway Pundit reported:

Joe Biden: The decision today is not without cost here at home…   With this action, it’s going to go up further.

Joe Biden: It’s simply not true my administration or policies are holding back domestic energy production.

On his first day in office, Joe Biden killed off 42,100 jobs by ending construction of the Keystone XL Pipeline. The project would have delivered 830,000 barrels of crude to the US every day.

Biden then postponed new federal leasing of oil and gas resources for at least a year. Biden’s policies did nothing to reduce greenhouse gas emissions and merely offer a leg-up to political rivals such as Russia.

The lunatics running the Democrat Party have destroyed the American energy sector and now all of us are suffering. 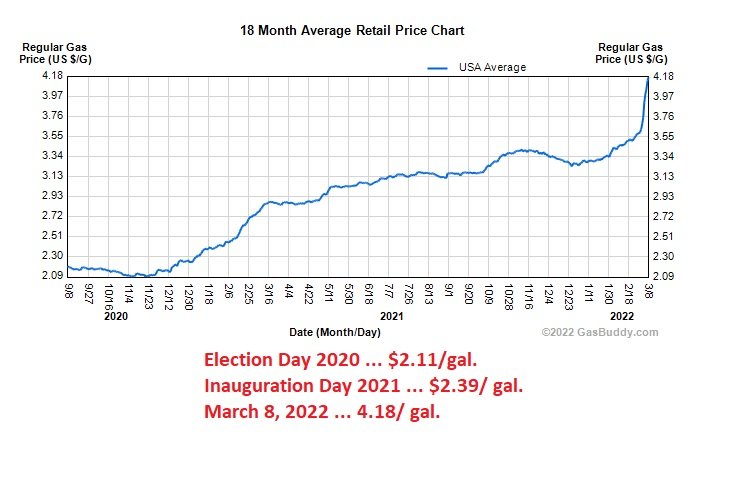 Watch the media give this liar a pass once again.

With the cost of gas going through the roof, the cost to transport goods will follow suit.  With this happening, EVERYTHING will see price increases as all goods need to be shipped from where they are manufacture to their final destination.

Unless we start pulling a crap ton more oil out of the ground here at home, this is the end of life as we know it.