An angry former congressional candidate in Florida has died after being downright vicious toward “anti-vaxxers”. Richard Rowe, a truck driver who ran for Congress in Florida and lost, “passed away unexpectedly,” his family reported, not long after he received his injections from Pfizer-BioNTech.

Mr. Richard “Ricky” Rowe, who was only 41-years-old, was already, for lack of a better term, an unpleasant personality based on his Facebook and Twitter archives, according to the COVID BLOG. The injections exacerbated his anger and hatred, providing more evidence that these shots can change people’s personalities and psychological states of mind.

Since his death, his Facebook account has been scrubbed, but things can still be found on the internet.

His hatred and vitriol towards non-vaccinated people date back to early 2021. 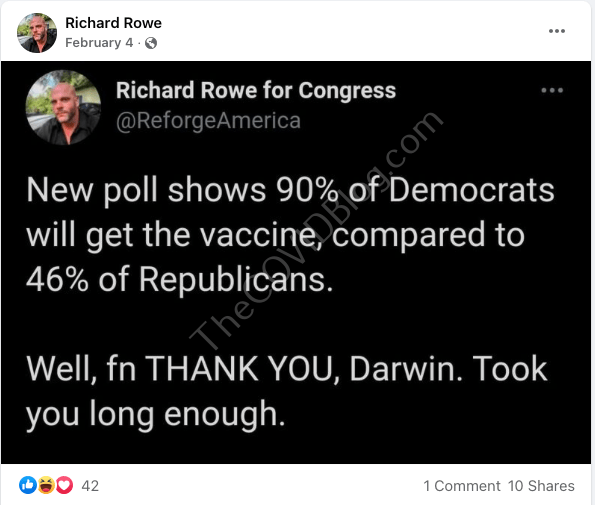 Mr. Rowe received his first Pfizer mRNA injection on August 12, according to his Facebook page. It’s unclear when he received the second injection. But Mr. Rowe was very loyal to the vaccine and all things surrounding it. Thus Mr. Rowe likely followed Centers for Disease Control instructions and got the second shot sometime between September 5 and 12. He would have had to in order to maintain his self-described “smug sense of moral and intellectual superiority.”

He wasted no time in calling all non-vaxxed people “Darwin’d” the day of his first injection, apparently meaning to say they are unevolved. 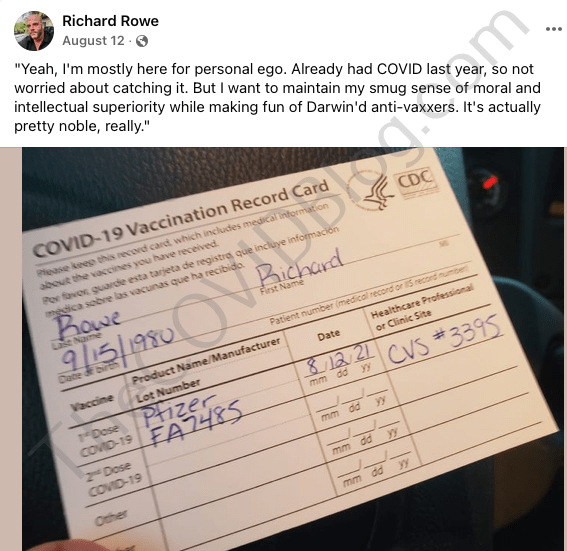 Mr. Rowe mocked non-vaxxed nurses and supported firing them for not getting the shots.

And the most horrific of all posts was the one declaring what we already know: government is slavery and the master can boss the slaves around and dictate whatever they want and brutally punish those who disobey.

Not long after that slave system supporting piece of absolute immorality was posted, his niece posted an update on his Facebook on November 2, confirming Mr. Rowe “passed away unexpectedly last week.”

Now, what could have possibly led to the “unexpected” death of Mr. Rowe not long after being fully “vaccinated” with Pfizer’s shot?