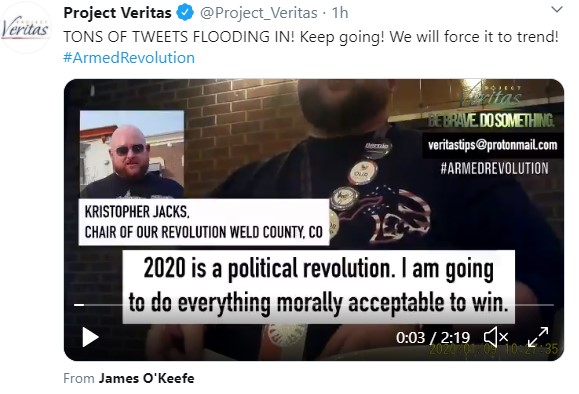 VIDEO: Dem. Our Revolution Chair said ‘It might take random deaths to beat the Right’, List of Supporters Includes ‘The Squad’

Our Revolution Chairman, Kristopher Jacks, a Chair who is also a Colorado Democrat Party Executive, was videotaped undercover with a member of Project Veritas talking about his tactics and plans to help Progressive Democrats win in the 2020 Presidential election.

A list of this violent group’s endorsements, including many members of the progressive far-left, are taken right from the website OurRevolution.com and appears at the end of this article.

Denver, Colorado is the most recent location of a murder of a Republican for attending a rally.

In a 12 minute video, Jacks is heard talking about brutal violence against Republicans, by his associates, laughing at times showing pleasure talking about his idea of a Populist uprising being violent, praising Antifa, saying that “If you want to do real shit, real Antifa shit, you have got to get real close and establish a pattern of random guys being dead. “A strategic hit against the 1% is what it is going to take, random Nazis in the street is what it is going to take,” Jacks said in the video.