Terrified Parents Leak Letters From Schools, Here’s What They Say

“Social-Emotional Learning” is a buzzword that is being thrown around in discussion about the failings of the American schools, but what is it all about, and why does it scare some parents so much?

As kids return to school in the Fall of 2021 parents around the country are more skeptical of schools than ever before, and the excitement over a new year of learning is unfortunately diminished for many American children.  What was once a hopeful American institution of learning, has now been transformed into an oftentimes secretive chamber of regulations and teaching tactics that parents do not really understand.

Oftentimes parents feel like they don’t have any advocates or anyone to talk to, so many chat groups and groups have sprung up around the United States full of frustrated parents. In one such chat room on social media, a father from Colorado posted a letter from his son’s guidance counselor, and he showed his specific concerns in highlighter:

“I am your student’s counselor. I am here to support them both academically and with any social-emotional issues, they may be going through,” the letter reads. 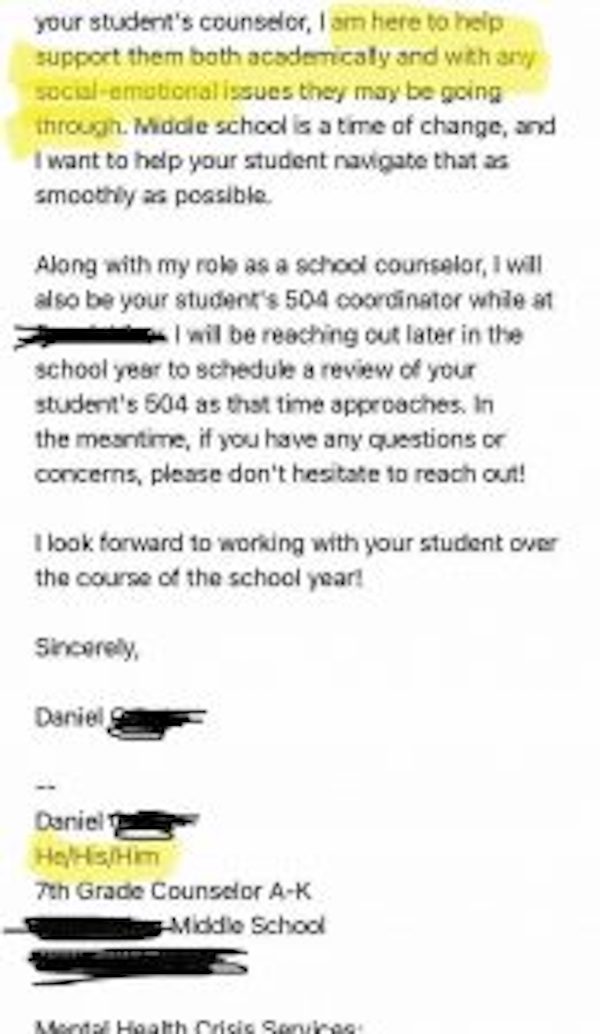 The parent obviously is frightened enough to remain anonymous and has crossed out the identifying information on the letter. I explored with the parent his feelings about the letter, and why it was alarming to him.

The parent told me that he was concerned about the use of pronouns and the tone of the letter in connection his son’s guidance at school to something called Social Emotional Learning, which he didn’t know about.

The pronouns were concerning for the father because he felt as if he had not given his consent to have his child in a learning environment where confusion about sexuality was being focused on and actually pushed, and he was worried that Social Emotional Learning gave someone who was gender-confused an edge to manipulate his child into adopting foreign concepts that would be harmful to the child’s education.

These are legit concerns, and the problem is that parents do not have an advocate for their concerns currently with our school system designed in a way to cut the parents out of the loop and give authority to school officials – who sometimes use professional jargon to discuss professional development issues that are foreign to parents.

So what is Social-Emotional Learning (SEL), and is it possible that it could benefit a student?

The answer is that it depends on what you want your child to learn in school.

SEL is a teaching style of communication that is housed in the “Equity” movement which is funded by the Department of Education to be distributed to local schools by way of teacher training, public speakers, continuing education, professional development, social justice activism and curriculum development.

The ideas that makeup SEL are based upon a decades-long belief in something called “emotional intelligence” which many proponents believe is a superior way of measuring a person’s skills, wisdom and potential in the workplace.

Also known as “emotional intelligence,” SEL has five core concepts; you can read more about each one below and discover ways to incorporate them into academic and unstructured class time:

Obviously, these topics are concerning to parents who want the schools to focus on building skills like reading, writing, Math, learning a trade.

The answer to whether or not the focus on feelings over facts, is dangerous, is in the idea that if the adult using the communication tactics to push the focus has an agenda, it is dangerous for children because it is not only removing the opportunity to teach a marketable skill, it is pushing a personal agenda.

If a parent wants their children to learn job kills, it is dangerous. Not many people get jobs for understanding some people’s use of personal pronouns.

And therein lies the real issues of our day. We have a divided country, and one side is not being heard or respected.

After Being Threatened by Biden’s DOJ, Dad Serves School Board with MASSIVE Lawsuit (VIDEO)