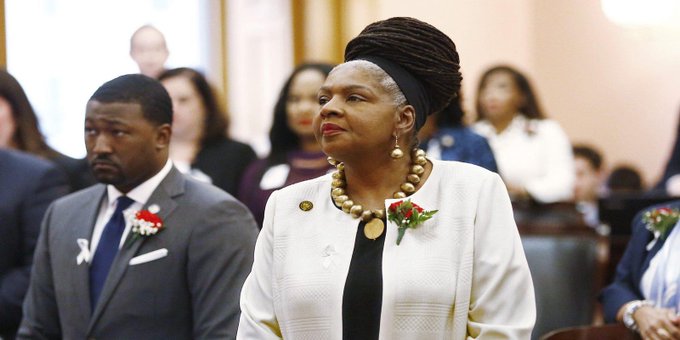 Black Democrat, OH State Rep Jumps on the Trump Train, Trump is not good at being racist

Cincinati News reported, on a Black Female Democrat State Represenative who is putting her support behind President Donald J. Trump, and that news comes at an interesting time when the Democrat Party has invested heavily into making claims that Trump and his supporters are racists.

“If there were any question that Columbus Rep. Bernadine Kennedy Kent was on the outs with Ohio Democrats, it was clear Tuesday when she announced her support of President Donald Trump,” Conncanni News reported.

“Kennedy Kent and her husband James Whitaker greeted Trump aboard Air Force One in Cleveland ahead of Tuesday night’s debate, according to a pool report. Kennedy Kent, who is Black, publicly announced her endorsement of Trump earlier in the day, citing low unemployment rates among Black Americans and increased support for historically black colleges and universities,” a local reporter wrote.

“We all recognize that gainful employment and economic development is the best deterrent against violence and social unrest, so I want to thank President Trump for his commitment to ensuring the success of the Black community in every way,” Kennedy Kent said in a news release.

Jennifer Jacobs reported on Twitter on Tuesday about Trump’s movements before the debate in Cleveland, and said:

The guest was barely spoken of, but is of great significance, her name is Bernadine Kennedy, and she is a Kent Ohio State Rep. the GOP.Com reported on her appearance with Trump and said:

“No matter what my feelings are towards the Democrat Party, one thing is crystal clear: my values truly align with President Donald J. Trump’s willingness to work with those of differing opinions and perspectives more so than with Joe Biden’s divisive rhetoric, promotion of mass incarceration, and disrespectful, insensitive ideologies that substantiates his infamous comment “…if you’re still deciding between me and Trump, then you ain’t Black…” during an interview on a popular African American radio program earlier this year.” – Bernadine Kennedy Kent Ohio State Representative (D) – District 25

“Tonight’s endorsement by State Representative Bernadine Kennedy Kent shows President Trump is an inspirational leader who has a record of achievement that is resonating in a bipartisan fashion. Now with his Platinum Plan for Black Economic Empowerment, there is no doubt that his bold agenda will encourage others in the Black community to publicly and privately support President Trump for a second term because he has kept his promises.” -Paris Dennard, RNC Senior Communications Advisor for Black Media Affairs

The evidence is clear that Trump is just really bad at being a racist.