In 1969, Calvary Chapel became a hub in what later became known as the Jesus movement, I started attending the services in Costa Mesa on Monday nights in 1992.

What made this move of God so special was the emphasis on God’s Word, worship, and sharing God’s love with anyone who would listen. The small chapel quickly required a new building. While it was under construction, the fast-growing church of mostly hippies, would meet in “the tent” and listen to Pastor Chuck Smith teach verse by verse, book by book, through the entire Bible.

With so many new follers of Christ, large and frequent baptisms would take place down at Huntington Beach, The Cove, and out of the growth, several young men were sent our to start Bible studies which several of them into large evangelical churches.

With the assault on our culture from multiple generations of Marxists graduating from the universities and a falling away of church attendees towards the pursuits of the world, things have been quieter down at the beaches for quite a while.

Some great news – the beaches are full of people again, with tons of people getting baptized.

A revival is taking place on the sandy shores of Huntington Beach, California where hundreds of people are gathering to worship, pray, and receive salvation.

“Saturate OC” began on July 3 in an effort to share the gospel and spread the good news about the Kingdom of God. 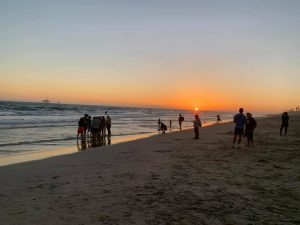 The idea for the seaside evangelical movement started in 2016 when it’s organizers, Parker and Jessi Green had a vision of thousands of people being baptized along the Huntington Beach Pier.

Jessi told The Christian Post that she felt God speak to her in January about a massive movement to take place this year.

“It would be like a threshing floor movement where God was going to start to separate the wheat from the tares,” she said.

Despite Gov. Gavin Newsom’s mandatory closing of churches due to COVID-19, Jessi’s vision was fully revealed, and Saturate OC was underway.

She wrote in a Facebook post, “California just announced this week that the church can’t meet inside – The Good News is that on Friday we declared “The Church has Left The Building.” You cant stop the Kingdom of God!”

California just announced this week that the church can’t meet inside – The Good News is that on Friday we declared “The Church has Left The Building.” You cant stop the Kingdom of God! #saturateoc

The outreach has taken place every Friday during July. Jessi’s goal is to reach 2,000 people who can then go out and disciple to thousands more.

“We believe that these collective evangelism events will activate The Church and Orange County will never be the same,” she wrote. “We are believing for 50+ ministry partners and 2,000 attendees prepared and expectant to lead 50,000 people to salvation.”

Bethel Music’s Sean Feucht told Fox News that the movement reminds him of the Jesus People Movement from the 60s and 70s.

“It’s eerily similar,” Feucht said, “There were protests, racial and social strife. Hippies were getting saved. A movement happened in California and swept across America, and even major news outlets covered it.”

In a video shared on Twitter, Feucht declared that a movement is rising up as people are stepping forward to give their lives to Jesus Christ.

“We just had an amazing time of worship. We are here baptizing people in the Pacific Ocean and God is moving in California, he added. “I know it’s the middle of a global pandemic and things are crazy, but in the midst of it all, God is moving.”

Could this be the beginnings of another Jesus People Movement in California? pic.twitter.com/aD89YsOfGh

“Thank you Lord for those who said YES tonight at Saturate OC!” Alli Joy Vazquez wrote in a Facebook post. “What a beautiful harvest of souls getting baptized in Jesus name! California for Jesus! The fearless ones are arising with the pure love of God.”

“From the days of John the Baptist until now the kingdom of heaven has suffered violence, and the violent take it by…

Check out their article for even more great information about this work of God. The only hope for America is a revival, pray for the Lord to move on the hearts of millions so we can repent and He can heal our land. Maranatha!